The Church and Contemporary Art

Last weekend’s Financial Times Magazine ran quite an interesting piece (not available on-line) by Rachel Spence on how Italy’s Roman Catholic Church is positioning itself in relation to contemporary art.

The church, of course, was the greatest of arts patrons for much of the second millennium. That changed, though, during the nineteenth century. Spence quotes Monsignor Timothy Verdon, director of the Office for Evangelization Through Art in the Florence Archdiocese, on why this is. “The Church found itself patronizing artists who were opposed to the avant-garde,” Verdon says. “The image it projected between the 1830s and 1940s was backward-looking in an age that increasingly felt the past was irrelevant.”

As part of Vatican II, Pope Paul VI attempted to change this situation with an affirmation of contemporary art’s place in the liturgy, but local clergy did not embrace the new. What emerged, according to Verdon, was “a sad parody of contemporaneity in the vestigial echoes of Fra Agelico style.”

The most interesting part of Spence’s piece, though is the discussion of the church’s strong preference for figuration over abstraction. The church’s official position is that artwork must “express the liturgy,” and as a result those charged with commissioning art for church spaces tend to default to figurative work.

Spence quotes a priest from an Italian parish explaining why liturgical art should be figurative. “The Church, in general,” he says, “is for simple people and they must be able to understand.” (This patronizing of parishioners might help explain why regular church attendance across Italy declined from 70% of the population to 40% over the second half of the last century.) 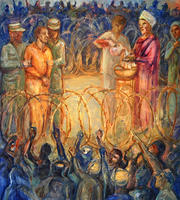 But it’s not only the Italian church that struggles with how to integrate art into the liturgy to create a suitable worship experience. Closer to home, New York artist Gwyneth Leech has received criticism recently over a cycle of figurative paintings representing the stations of the cross. Commissioned by an Episcopal church, Saint Paul’s on the Green, in Norwalk, CT, Leech chose not only to set the paintings in the present day (a tradition that goes back to the middle ages), but also to situate the narrative in the context of war. (Station 1: Jesus is Condemned to Death is at right.)

Of her choices, Leech says, “I was asked to combine the traditional stations iconography with elements of the world we live in. This brief eventually led to my vision of Christ as a prisoner of war, and as a hostage tortured by insurgents. The crowds are refugees. The people weeping at the foot of the cross are grieving Iraqis and Americans who have lost family members to bombs and to violence.”

The question of how well Leech’s contemporary iconography integrates with the historical narrative remains open. There is no question, though, that Leech’s paintings have caused controversy in Norwalk. The reason for this, I believe, is similar to the reason that the Italian priest gave for restricting liturgical art to figuration: certain people are not able to see an object, understand metaphor, and make the leap to the concept that stands behind the object at hand.

Corporate curators made a realization half a century ago. By replacing figuration with abstraction in the art they commissioned for public buildings, they were able to remove the possibility that conflict would arise about the art’s subject matter. It might be time for the church to examine that strategy now—and to rethink whether the liturgy must be supported with representational art.

But there would be a secondary benefit as well. In her FT piece Spence quotes Danilo Eccher, director of Rome’s Museum of Contemporary Art on the applicability of figuration for today’s religious art. “Medieval man needed frescoed churches because at home he had nothing, but we are bombarded daily by images. Contemporary man therefore has need of a space for secret emotion, in silence more than in image.” What better way to create a meditative space suitable for worship than to remove all reference to the stresses of the everyday world?

Search From the Floor

From the Floor's Archives